Dissecting the Relationship of Jean Grey and Wolverine 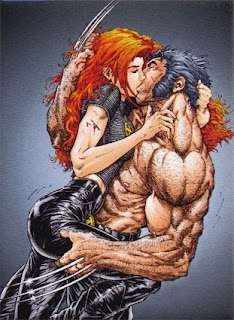 The content of this post is actually lifted form a post I made on a message board a while back. I thought it was poignant to post here as well because it covers a topic that is currently an ongoing issue in X-men Supreme and it is also a major issue of a current comics, X-men Forever Annual #1. The nature of this relationship has always been a source of contention in the comics so it's unavoidable for anyone who is trying to make a new X-men series. Here's my thoughts on this subject.

Among the most famous and probably most controversial pairings has to be Wolverine and Jean Grey. I've noticed there are a few notable Jean/Logan websites. It's a pretty popular pairing in the annuls of X-men. It became a central theme of the X-men movies. So naturally, I've used this pairing extensively in my X-men Supreme series so far. In doing so I've confronted something that has been bothering me for years now.

The romance between Jean Grey and Wolverine has been by far the most mishandled, misconstrued, and at times destructive pairing in the history of X-men. I know that's saying a lot, but given how long this plot has been used I think we can objectively say it ranks right up there. I've never come across a comic book couple that has such ardent detractors and die-hard supporters. As a fan in general, I think it's one of those "good on paper" type ideas that just was so poorly fleshed out that it's become an open scab throughout the story of the X-men. Part of the problem was how it started. Chris Claremont originally had Logan attracted to Jean Grey because he just soured on Cyclops and Jean Grey. He has gone on record as saying he completely despised the Scott/Jean romance after what happened with Madelyn Pryor and had he stayed on board, he would have broken them up and put Jean with Logan. He's already shown this in his X-men Forever series. It was one of the many reasons he split with the editors at the time. I think this sort of sets the tone because it wasn't so much done because these characters complimented each other. It was done more so as a foil to the Scott/Jean romance. That just really doesn't work. That would be akin to being a soccer fan just because you hate American football.

As a result, Logan and Jean's attraction was made to be really spotty. There were moments like Xtinction Agenda and Inferno where they kissed, but Jean pushed away. Then there were later moments like in Morrison where the kissing was mutual, but coupled with Jean lamenting over her love for Scott. The movies played this up even more by not just having Logan be the anti-Scott, but by having the part of Jean that was attracted to him be the darker part that became Phoenix. That really doesn't fall in line with her character and it speaks poorly of Logan's influence not just on her, but on everybody he's close to. In both cases it's always the same. There's an unrequited love between them. Logan loves Jean, but Jean doesn't love him in the same way and the man she does love is a man Logan can't stand. This sort of angle is good for a few plots, but it has been dragged out for so long over the years that it's not just old. It's destructive to their characters.

I look at X-men Forever as the best example. In this Chris Claremont clearly wanted them together now that no editors were in his way. But he couldn't undo the depth and complexity of the relationship Jean had with Scott, much of which he himself built up. The only way to make it happen was to force it and that just destroyed the elements of each character. It made Jean come off as a cheating skank and Logan come off as some overly emotional pretty boy when he's supposed to be the ultimate loner. This highlights the main stumbling block to their affairs. Logan and Jean are really made to compliment each other in the proper context. X-men Forever just thrust them together through sheer editorial force. Other mediums like the movies, Ultimate X-men, and the Earth X series put them together without any real depth. It was all just attraction that was pulled out of the air and used as a plot device. At no point was any effort made to really let it happen naturally as has been done with other successful pairings. The only instance I can cite that really made a serious effort to show their chemistry was Age of Apocalypse. That's where their romance was built around their respective characters and plot. It felt natural as it emerged and it was a good dramatic element to the underlying story. That's been the lone exception and I can't contemplate too many other areas where it has been done quite as well.

Now I know there are some who are completely disgusted by Jean and Logan as a pairing. That's perfectly fair. People can have their own tastes. Some hate it just because they love Scott and Jean so much better or they prefer Logan with someone else. My position is that any pairing can be made to work if it's done properly. And Jean/Logan has almost never been done properly. It's almost always been detrimental to each character. It either makes Jean out to be a skank or it takes away some of the defining characteristics that make Logan who he is. That's why I've often dreaded seeing references to it in most comics. That is also why I'm often against Jean hooking up with Logan when she comes back in 616 because given how it's been handled, it has little chance of ending well. I can understand in some ways how these two would be drawn together. They do have serious chemistry. That attraction is not just physical. There is some emotional depth to it and they do have potential. It's just the kind of potential that's not easily realized.

I've tried to keep this in mind as I've written my X-men Supreme series. At the moment, I have Jean and Logan dating. There's no unrequited love or unspoken passion. They actually are boyfriend and girlfriend and they actually are dating as a real couple. It's an angle to the characters I haven't seen explored too often even in fanfiction. I wanted to set my series apart in that respect so I've made a concerted effort to flesh out the Jean/Logan romance while avoiding some of the mistakes I feel have been made in other mediums. I'm sure some of the Jean fans here will disapprove. I respect that. But this is something I feel should be addressed because it's been so mangled in so many other ways.

Right now I'm just 9 issues in and Jean and Logan have been together since issue 5. I'm still left with some questions about this apiring. Can it be done well? Has it been done well? Have I done an okay job with it on my end? Am I completely wrong on my assessment? If so, please tell me. I want to know what you think. Jean and Logan are both some of my all time favorite comic characters. I've often had a conflicted view of the romance plots they've endured and I think it's something that deserves to be discussed.